Prevention of Nausea and Vomiting In Caesarean Section under Spinal Anaesthesia

Background: Antiemetic effect of midazolam could be explained by its action at the chemoreceptor trigger zone reducing synthesis, release and postsynaptic effect of dopamine. Administration of low dose of iv midazolam as premedication prior to caesarean section reduces anxiety of mother, without any adverse effect on newborn. Therefore present study was done with an aim to evaluate the effect of intratechal midazolam for reduction in incidence of intraoperative and immediate postoperative nausea and vomiting.Subjects and Methods:Present prospective study was performed in the department of Anesthesia, Pacific institute of Medical Science, Udaipur, Rajasthan for the period of one year. The patients received 10 mg (2.0ml) of 0.5% hyperbaric bupivacaine combined with 2 mg (0.4 ml) midazolam in Group A as a study group and 10 mg (2.0ml) of 0.5% hyperbaric bupivacaine combined with 0.4 ml normal saline in Group B as a control group. The patients were evaluated for possible adverse effects, including sedation, respiratory depression, nausea and vomiting, by a researcher who was blinded to the details of the study until 3 hours after the end of surgery.Results:28.8% of patients in control group had nausea as compared to 17.7% of patients in midazolam group. Similarly, 15.5% of the patients in control group had retching as compared to 2.2% in midazolam group. 2.2% of patients in midazolam group had frank vomiting where as in control group, 18.33% of the patients had vomiting. Difference between both groups regarding emetic symptoms was found to be significant statistically (p≤0.05).Conclusion: Intrathecal midazolam 2 mg with 0.5% hyperbaric bupivacaine in the subarachnoid block was effective significantly to prevent nausea and vomiting in parturient undergoing caesarean section under spinal anaesthesia. 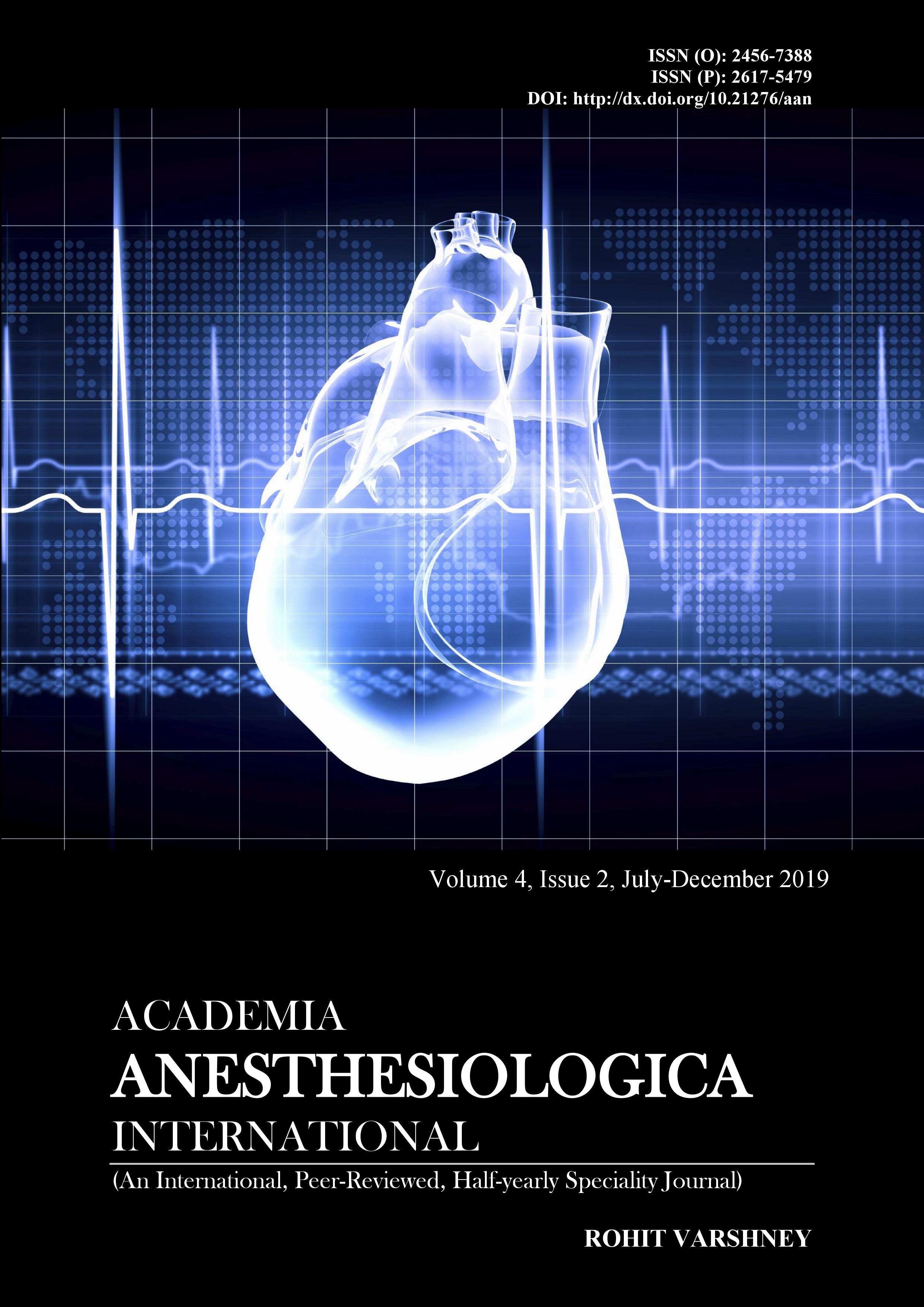 Published
2019-10-01
How to Cite
Naitik B. Patel. (2019). Utilization of Intrathecal Midazolam for the Prevention of Nausea and Vomiting In Caesarean Section under Spinal Anaesthesia- A Prospective Study. Academia Anesthesiologica International, 4(2), 173-176. Retrieved from https://aijournals.com/index.php/aan/article/view/973
Download Citation
Issue
Vol 4 No 2 (2019): July - December
Section
Articles